When I started investigating Ski Instructor Jobs in New Zealand a couple of years ago the first field that repeatedly came up was Treble Cone. Fellow Ski Instructors had worked there and I had seen stunning images of the view on Facebook and Co. Back then I inquired working there – but as soon as I had figured out that their ski school is basically run & dominated by Austrian (Staatliche) Ski Instructors I knew it wasn’t for me and opted for the more international and rather beginner-focused Cardrona Alpine Resort – on the other side of the mountain but still close to Wanaka.

Although I had escaped the Austrian Ski Instructor community work-wise there was no way I could in my social life. They are dominating Wanaka’s night life and seem to be everywhere! Even at Cardrona Ski School parties, as I found out during last year’s welcome party where two of Treble Cone’s instructors had sneaked in (most of you can probably guess which dynamic Austrian duo that was).

Nowadays I’m quite happy to count them among my Wanaka circle of friends – social life wouldn’t be half as fun without them and I would have missed out on many great nights and amazing dinners. They still keep teasing me about working at “The Flat White” – which is not only the name of a popular coffee (Häferlkaffee) here in New Zealand but also perfectly describes the flatness of Cardrona Alpine Resort. Treble Cone – on the other hand – is often referred to as “The Strong Black” – another coffee choice and – you probably get it – perfectly describes the steepness of Treble Cone’s slopes. So while Cardrona is for beginners and very family friendly, Treble Cone definitely is the preferred choice of better skiers who are looking for steeper terrain and endless off piste possibilities.

For me – Cardrona is my work mountain but on my days off I thoroughly enjoy some hours of skiing at Treble Cone. This Saturday my friends Sanna & Kathi came along and we had a great day up there – jumping cliffs, cruising through the natural half pipe and testing some great new skis. I’ll let the pictures speak for themselves…. 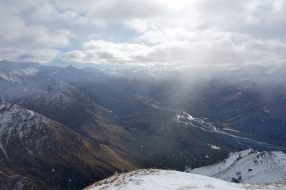 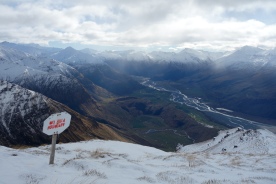 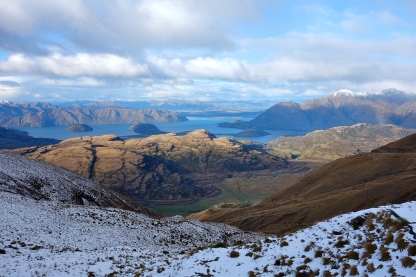 But what would be a day at Treble Cone without meeting my two favourite Austrians? We bumped into them at the end of a long day and they introduced us to the fun of Tandem Skiing (two skiers on one pair of skies). Not that easy when we first tried but we got the hang of it and enjoyed some good laughs on the beginners hill. 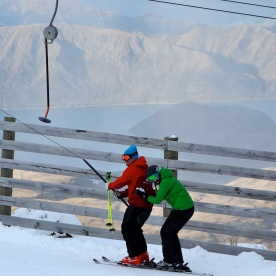